Then Let Me Be Evil 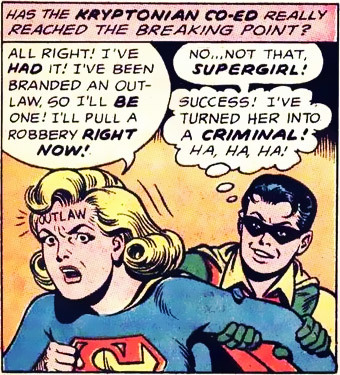 Dick Grayson is a dick.
"Thou call'dst me dog before thou hadst a cause;
But, since I am a dog, beware my fangs."
— Shylock, The Merchant of Venice
Advertisement:

Sometimes the supposed "forces of good" in a story treat an "evil" character badly enough, for long enough, that the "evil" character just gives up trying to show the heroes that they are not evil and becomes a villain for real. Prolonged exposure to the cynical side of the Sliding Scale of Idealism Versus Cynicism has conditioned this character to accept the fact that Humans Are the Real Monsters, and if they want to get anywhere in life, they have to be every bit as dirty and cruel as they are.

The villain normally gets to this point by being rejected by the resident morality enforcers and treated to demonization and assumptive behavior. Whether it is due to being of a different nationality, hailing from a (stereotypically) Always Chaotic Evil species in somewhat more justified cases, having bad things happen wherever they go, or having had a few evil moments in the past, they just cannot get a break; even if they try to do good deeds, it will only lead to being horrifically punished for them at worst and having them be disregarded or treated as insincere attempts at fostering good will at best. As they see it, their reputation is so tarnished that there is absolutely no way of changing anyone's mind that they are not a monster. So what is the use of trying to be anything other than the monster which they are already seen as?

In some cases, a genuinely innocent person being repeatedly framed up for committing things they never did into a stage where they have no chance to redeem themselves might as well become exactly what they are being framed as and repay their favors onto everyone.

Once this trope has been declared, unlike a lot of Ambiguously Evil characters, the new villains won't be redeemed in spite of their sympathetic traits — this is largely because it took a lot of work to turn them evil in the first place. Interestingly, in spite of all this, they don't look for excuses to kick puppies — they still have morals, they just exercise a (much) more cynical variant of The Golden Rule. That is not to say that they won't do terrible things — indeed, a Moral Event Horizon may follow. The difference is that while they may wind up doing something truly heinous or, at the very least, becoming horribly callous and ruthless, they won't go around engaging in wanton acts of needless cruelty For the Evulz. However, they tend to be good at being their chosen brand of evil, often to the regret of those that forced them into the trope.

The trope can be played to be more or less convincing for the audience depending on what point the writer wants to make. You can have the statement come across like a cheap Freudian Excuse such that it feels just like the villain is not truly owning up to their own part in their villainy. You could have it come across as a genuine explanation, but still not an excuse; either their actions were too far beyond the pale, or it is a case of "too little, too late". And then again, it could be used as a genuine exposure of mistakes society has made, or even an outright exposure and commentary of the other characters' hypocrisy.

This trope is often a perfect point for the audience to begin Rooting for the Empire; after all, if the character's ascended to the status of a main antagonist because of them being subjected to prolonged (perceived or actual) Jerkassery, then what's the harm in wishing they might finally get a chance to succeed in their new role?

At that last point, you might start wondering who the villain really is, and the trope enters into Designated Villain, Villain Protagonist, and Hero Antagonist areas. You might have fun arguing with people over the authorial intent. There are also quite a few non-evil examples on this page, whose cynicism and bitterness makes them adopt a harsh exterior to hide the kindness that they were never rewarded for.

Compare Driven to Villainy when a traumatic event causes one to become evil. Related to Heel Realization, Internalized Categorism, He Who Fights Monsters, Reformed, but Rejected, Heel–Face Door-Slam, Cycle of Revenge, Trapped in Villainy, Not Helping Your Case, Interrupted Cooldown Hug, Fully-Embraced Fiend, Who's Laughing Now?, Woobie, Destroyer of Worlds, Gone Horribly Right, Monster Façade, and Big Bad Slippage. Contrast You Are Better Than You Think You Are and Becoming the Mask (when a character pretends to be a good guy and gets treated like a good guy long enough that they actually become a good guy.)

See also Self-Fulfilling Prophecy, Create Your Own Villain, and Nature Versus Nurture.

SPOILER WARNING: due to the nature of this trope, spoilers abound. You Have Been Warned!