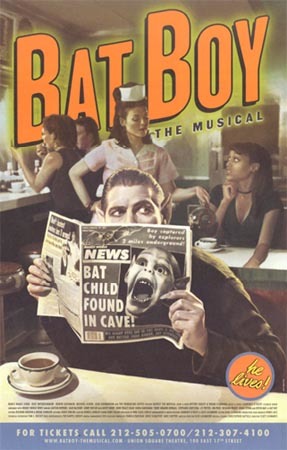 He has suffered, and now it's your turn.
You are here not to laugh; but to learn.
Hear his ungodly shriek; Watch what they put him through!
Heed the tale of a filthy freak—who's just like you!
And you!
And YOU!
— Hold Me, Bat Boy, (1997)
Advertisement:

Bat Boy: The Musical is an American rock musical with its book written by Keythe Farley and Brian Flemming and Lawrence O'Keefe doing its music and lyrics. It's a musical production loosely based on the exploits of the Weekly World News regular, "Bat Boy".

In the town of Hope Falls, West Virginia, three kids, Rick, Ron, and Ruthie, are spelunking when they discover a deformed kid in the cave. The kid injures Ruthie but Ron and Rick manage to subdue it and bring it to the town's sheriff, who brings Bat Boy over to Meredith and Shelley Parker, who agree to keep him until Meredith's husband, veterinarian Dr. Parker, returns home. Meredith and Shelley try to tame the creature whom Meredith names Edgar, but when the town of Hope Falls suddenly discover their cows mysteriously dying, eventually blaming Bat Boy, and Dr. Parker planning to put the creature down, any effort Shelley and Meredith take to dispel the fears surrounding Bat Boy and integrate it into society may be easier said than done...

Ever since its first premiere in 1997, this musical has since been produced and performed off-Broadway, in London's West End and in worldwide scores and showings.

Not to be confused with Batman.

Tropes associated with Bat Boy include: