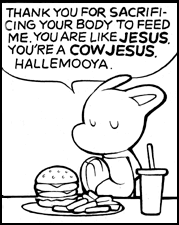 The character is doing something akin to saying grace, but instead of addressing a deity, they are talking to their food. They might thank an animal they killed for its meat, or apologize to it for the kill, justifying it with the kill's necessity for their own survival.

This is usually a sign that the hunter in question is in tune with nature, possibly a Noble Savage. Expect them to make use of all parts of the animal, too.

In contrast, it's something an Egomaniac Hunter or Evil Poacher is not likely to do.