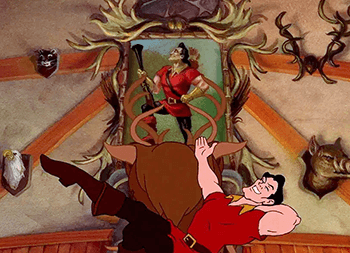 "I use antlers in all of my decorating!"
"Hunting was his love. He made it a practice never to let a day go by without killing something. It didn't much matter what."
— The Princess Bride
Advertisement:

This guy just loves to hunt. He doesn't do it for food, or because his prey is a danger to mankind, not even because It's Personal. He will hunt anything that tickles his fancy and he does it for the thrill and the glory and self-gratification. He is an adventurer and egomaniac.

He doesn't shoot ducks over a pond; his prey has to live far, far away in a most dangerous and uncomfortable location and be hard to find, impressive looking, and immensely powerful. Great cats, large sea creatures, elephants, and crocodiles as well as birds of prey come to mind. If the author is more fantastically inclined, he can let the Egomaniac Hunter go after dragons, dinosaurs, phoenixes, unicorns, you name it.

Sometimes, the Egomaniac Hunter even goes after anthropomorphic animals, despite or even as a direct result of knowing that they are sapient. This is typically played off as Black Comedy, but may also be Played for Drama as a very uncomfortable yet chillingly logical conclusion to What Measure Is a Non-Human?.

This character isn't very likable in modern renditions. His (and it's almost always a man) usual traits include some of these: selfishness, recklessness, trigger-happiness, racism and arrogance. Older works show him in a more favorable light, but often, he's seen as decadent by them, too. Extra points for striking the Captain Morgan Pose over his fallen victim, having a gallery of rare trophies, endangering others in his hunts, gleefully shooting something that everyone knows is the last of its kind just so he can have it mounted and stuffed, or chasing sapient game.

He is usually European or American (perhaps with an occasional Awesome Aussie or Amoral Afrikaner thrown in for flavour), but he can have any real or fictional ethnicity.

He provides contrast to reasonable or anviliciously eco-sensitive heroes; he can bring danger to the group, die a funny death, or just be the hero's employer whom he brings along for the ride. This character type also commonly appears in Horror or Adventure films where the antagonist is some kind of huge, dangerous animal or monster.

Because Hunters Are Evil, he will sooner or later break the law to be able to continue with the killing and become an Evil Poacher, provided, of course, he isn't already one.

Subtrope of Classical Hunter and In Harm's Way.

Despite the name and his personality, not to be confused with pro wrestler Triple H, who was previously known as Hunter Hearst Helmsley.

Dick Chateau was a big game hunter who travelled all over Alaska hunting the animals until Game Warden Burt forbid him was hunting them due to killing some endangered species. He was bored until he see saw the mascot for the Polar Bear panini shop and he suddenly desires to take the costume and started collecting mascots ever since.

Dick Chateau was a big game hunter who travelled all over Alaska hunting the animals until Game Warden Burt forbid him was hunting them due to killing some endangered species. He was bored until he see saw the mascot for the Polar Bear panini shop and he suddenly desires to take the costume and started collecting mascots ever since.