Film / The Beast Must Die 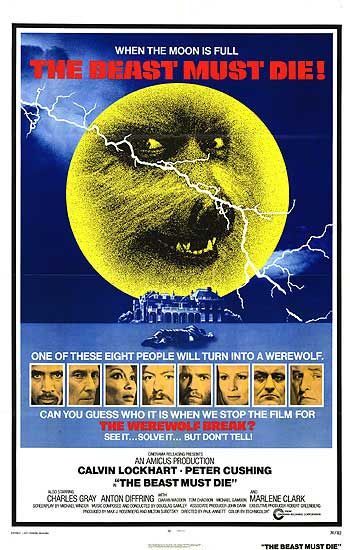 "This film is a detective story— in which you are the detective. The question is not "Who is the murderer?"— But "Who is the werewolf?" After all the clues have been shown— You will get a chance to give your answer. Watch for The Werewolf Break."
— The opening narration
Advertisement:

And that's essentially the gist of it. Rich hunter Tom Newcliffe (Calvin Lockhart) invites several people to his mansion, the reason being that he desires to hunt for a new, more dangerous game: a werewolf. And he knows that one of his guests is one.

The film was produced by Amicus Productions and released in 1974 to cash in the blaxploitation craze. It is based on the story "There Shall Be No Darkness" by James Blish.