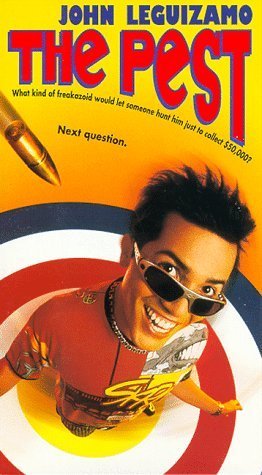 "I simply aim to scam, simply because I can!"
— Pest
Advertisement:

Pestario "Pest" Vargas (John Leguizamo) is a fast-talking, silver-tongued professional con artist living in the heat of Miami, FL. At least, to the people that fall for his scams. In reality, he's a clumsy, loud-mouthed teenager who makes a living off of the local stupidity. He also happens to owe a lot of money to the Scottish mafia. $50,000 to be exact. He has 2 days to get them the cash. Lucky for him, he comes across a German huntsman, named Gustav Shank (Jeffrey Jones), who owns a private island where he does said hunting, and offers Pest $50,000 to go hunting with him. So what's the catch? He is! Now he has 1 day to survive the wilderness, dodge the crazed huntsman and the Scottish mob, and have dinner with his girlfriend's parents!

Released in 1997, this was an independent film directed by Paul Miller starring John Leguizamo as Pest. It drew a lot of inspiration from the 1924 short story The Most Dangerous Game.

The Pest contains examples of the following tropes