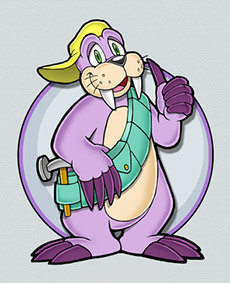 Definitely nicer than the Eggman.note Image

Walruses don't seem to have a clear-cut stereotype of their own. While it's usually agreed that walrus characters should be big, fat, and lazy, their moral standing tends to vary. While some works portray walruses as villains, this page is for walruses who are depicted more positively.

There are quite a few reasons why they are portrayed this way. Most notably, their big, blubbery appearance with their sleepy eyes seem to indicate Big Fun or Gentle Giants, in the same vein as hippos, giraffes and bears. It helps that Real Life walruses are far less dangerous to humans than those other animals are, preferring to slip away rather than attack when threatened.note However, people being killed by walruses who become aggressive is not unknown, after all adults are tremendously heavy and can throw their weight around if they so choose, so most animal experts advise that they should be kept at a distance

Another factor in their portrayal as heroes may have something to do with the fact that they are related to seals, which are almost universally loved due to their cuteness and playfulness. Walruses may be seen in a similar way, albeit more placid and less energetic.

In works that do not aim for realism, Warm-Hearted Walruses tend to differ in physical appearance from real ones. For one thing, they may be portrayed as smaller and softer-looking, with much smoother skin. Their most notable features, the tusks, are much smaller and rounded than they would be in real life. Instead of a walrus' dull pinkish-brown skin, a friendly walrus is given a brighter, more lively color like blue or purple.