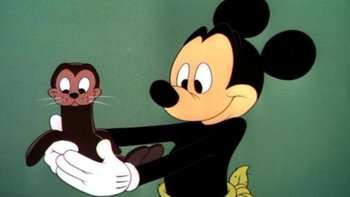 Seals are almost universally beloved for their cute appearance and playful behavior. Their face looks similar to a dog or cat, making them the aquatic version of a Precious Puppy or Cute Kitten. This often carries over into fiction, when seals are portrayed as adorable and benevolent characters. One common kind of seal that is depicted are baby harp seals, which have plump bodies in snow white coats, big dark eyes and are entirely helpless on the ice.

Although sea lions are much rarer in fiction than seals are, they can be included here too. Sea lions as well as their close cousins, the fur seals, are different from true seals — they have ear flaps, flippers that allow them to "walk" on land, and more — but the pinnipeds are similar enough that a separate trope for sea lions isn't necessary.

Selkies and Wereseals can also be included.