Western Animation / Song of the Sea 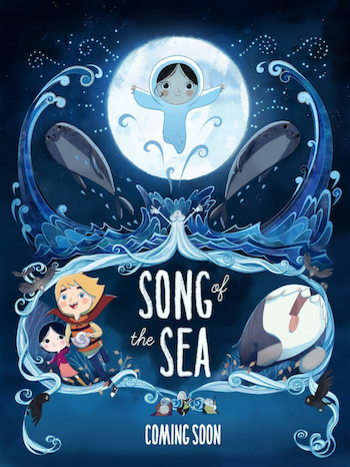 Between the here, between the now...
"This is an ancient shell that my mother gave me a long time ago.
Hold it to your ear and listen carefully. You'll hear the song of the sea."
— Bronagh
Advertisement:

Song of the Sea is the second film from Cartoon Saloon and Tomm Moore, the creators of The Secret of Kells, and is the second in their Irish folklore trilogy encompassing Kells and Wolfwalkers. It was released on December 19, 2014, and it was nominated for Best Animated Feature at the 2015 Academy Awards.

In 1981, tragedy struck an Irish family when a woman, Bronagh, vanished on a dark, stormy night, leaving behind her husband, Conor, her 4-year-old son, Ben, and the family dog, Cú, along with her newborn daughter, Saoirse. Six years have passed since then; Conor is still grieving and Ben harbours resentment towards his younger sister, silently blaming her for their mother's disappearance. Their Granny, who worries that Ben and Saoirse aren't safe living on an island far from the mainland, resorts to taking her grandkids to live with her in the city, while their father and dog remain at the isolated lighthouse Conor operates.

Refusing to be without Cú, Ben plots to escape the city that Halloween night and get back to the lighthouse with Saoirse in tow. However, the night before the move there was a revelation: quiet little Saoirse is, in fact, a selkie (a mythological humanoid who is capable of shapeshifting into a seal when making contact with a large body of water). So now, brother and sister must work together, not just to get back home, but also to rescue a dying world filled with beings that Ben knows about only from his mother's stories. But he needs to overcome his darkest fears and she needs to find her voice (metaphorically and literally).

Fortunately, it has its own production blog here

Has nothing to do with Gordon Quid's "Song of the Sea". Thankfully.

Song of the Sea provides examples of:

Ben is deeply resentful of his younger sister Saorise, blaming her for his mother's death, and spends most of the first half of the film picking on her.

Ben is deeply resentful of his younger sister Saorise, blaming her for his mother's death, and spends most of the first half of the film picking on her.