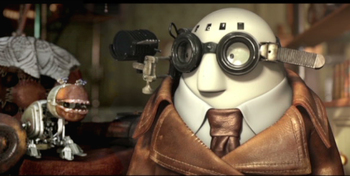 Mr. Hublot is a 2014 animated short film from Luxembourg, directed by Laurent Witz and Alexandre Espigares.

In some sort of steampunk future where everyone and everything is a machine, Mr. Hublot is an odd little mechanical man with a counter in his head that rolls backwards and forwards. He also has a bad case of OCD, being unable to leave his apartment until he turns the lights on and off a certain number of times. One day, Mr. Hublot notices a cute little mechanical puppy which has made its home in a box across the street. When the garbage truck eventually comes to pick up the box, Mr. Hublot races to save the dog.