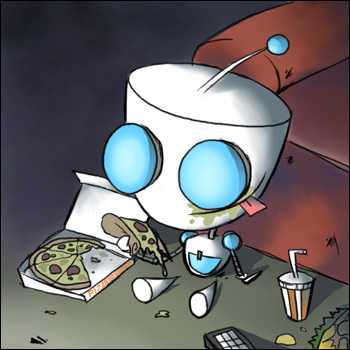 Vegeta: So, are you ready to die, android?
Android 15: [starts taking a swig from his flask]
Vegeta: Ah... are you...?
Android 15: [continues drinking]
Vegeta: Does that even do anything for you?
Android 15: Not anymore.
— Dragon Ball Z Abridged, "Super Android 13"
Advertisement:

This trope is for robots and cyborgs with primarily robotic bodies that consume human food and drink.

This is very common for a Ridiculously Human Robot who may need to eat food to maintain The Masquerade, but it's certainly not limited to that trope. Some robots consume food as a power source (Calories powering machines is something that exists in the real world, though in very early stages) either for convenience or rarely for horror. Other robots may eat food they have no way of processing and no logical need for as pure Rule of Funny hedonism and to anthropomorphize otherwise non-human machines. Despite being unable to digest food, don't be surprised if caffeine, sugar, or alcohol still somehow affects a robot's behavior.

Many robots that can eat food also have a distinct preference, whether it be for something that's easy for their system to convert to energy or whether it be just the same tasty junk foods that humans love. Alcohol and sweets are popular for both reasons.

Not to be confused with a Big Eater, which some people would refer to as 'an eating machine', although they may overlap. Compare with Metal Muncher, which involves robots eating something that isn't similar to human food.

Despite being an alien robot, MechaBot instantly loves the taste of curry puffs the moment he tries them, and often anticipates for more.

Despite being an alien robot, MechaBot instantly loves the taste of curry puffs the moment he tries them, and often anticipates for more.