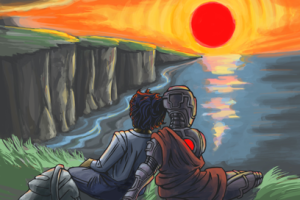 Written by Kevin Gold and produced by Choice of Games, Choice of Robots is the interactive story of a twenty-four year old graduate in the Ph.D. program for Computer Science at Stanford in Palo Alto, California, who wakes up after a vivid dream about a robot they created on the day that they plan to create said robot. The year is 2019, and new technology abounds, from flying cars, to the almost-common use of 3D printers, and robots becoming more and more commonplace. The Player Character hopes to put together a robot with a fully functional AI in the hopes of earning their degree.
Advertisement:

Choice of Robots is one of the most popular of the company's games, and is available here