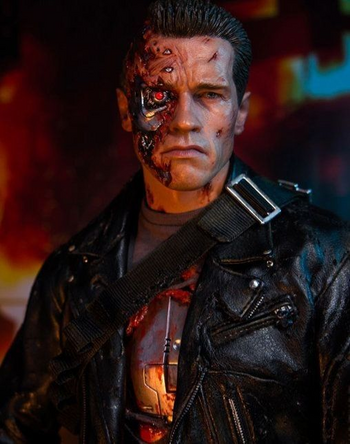 John: Holy shit! You're really real! I mean, you're like a machine underneath, right? But sort of alive outside?
Terminator: I'm a cybernetic organism. Living tissue over a metal endoskeleton.
— Terminator 2: Judgment Day
Advertisement:

Everyone knows that a Cyborg is a living being with technological components of one sort or another grafted onto his/her body. Though sometimes in fiction, it is done in the opposite direction in which a AI controlled machine is grafted with biological tissue (either by another individual or of its own volition). How such a robotic entity is created can be for one of or a combination of a variety of reasons:

Regardless of the reasons that a robot has been given biological tissues, it in this regard also has some of the drawbacks in that it will have to gain certain nutrition (and probably a mechanism for waste disposal) to ensure that its biological components remain healthy, though to what extent this shows up in a work and is addressed in it will vary.

A defining trait of this type of robotic entity is that the thoroughly machine AI governing an entity that is partly biological. As a result of such a reversal of an artificially created intelligence directly controlling tissues that were taken from naturally evolved beings (or possibly synthetically created living tissue in some cases), it is a creation that displays machinely unnatural tendencies despite being composed of biological tissue and thus likely to invoke Uncanny Valley from some of the audience.

The other wiki has an article on such a hypothetical machine called Biorobotics.