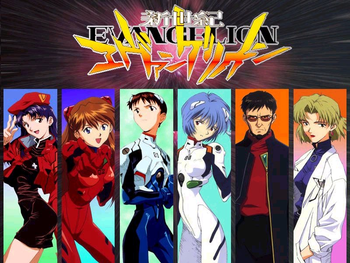 Neon Genesis Evangelion is a Genre-Busting franchise created by Hideaki Anno, originally as an anime series. The series was produced by Studio Gainax from 1995 to 1998 and is currently owned by Studio Khara from 2007 onwards.

Set in 2015, the franchise follows the story of the Three Children as they seek to defend the human civilization from the monstrous Angels, and has expanded from the small screen to video games, literature, audio plays and much more.

Since its inception, Neon Genesis Evangelion has grown into one of the most well-known franchises in anime history, becoming a pop culture phenomenon ever since.