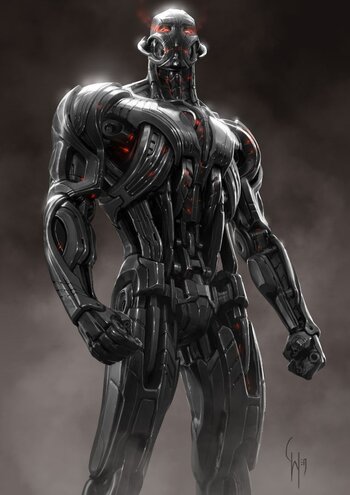 Do you even lift, bro-bot?
"Have you been juicing? A little vibranium cocktail? You're looking—I don't wanna say puffy ..."
— Iron Man to Ultron, Avengers: Age of Ultron
Advertisement:

We already know that androids, robots, cyborgs, and other mechanical beings are stronger than organics. This is when they're constructed with the Heroic Build to prove it.

While more realistically utilitarian real-world robots often make do with a skeletal framework, real-life creators and in-universe roboticists often feel that such pragmatic designs don't do the sheer might of their robot creation justice. In such cases, the designer (which is sometimes the machine itself) goes to some effort to give themselves the outward appearance of a muscular human, often whether or not their "muscles" actually move or function as such. And while this might seem Awesome, but Impractical at first glance, one shouldn't discount the intimidation factor, as the mechanoid in question can be not only jacked, but also many times the size of any ordinary human.

Part of the growing popularity of this trope in live action comes with the increasing sophistication of CG allowing for more moving parts to be detailed and animated. It's much easier to show all those tiny components, rather than using a blocky outward appearance as a kind of SFX shorthand for "robot".

Compare Sculpted Physique. Contrast SkeleBot 9000. See also Humongous Mecha, although the style for the latter is often to render the character as if they're wearing a suit of armor, the better to emphasize their mechanical qualities. Note that while this can cover characters with Artificial Limbs, the key element is machine components built to look suitably macho. Robots and androids with artificially grown organic tissue like Blade Runner replicants or the T-800 don't qualify; see Ambiguous Robots and Meat-Sack Robot instead.