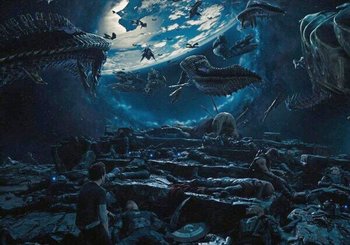 "A hostile alien army came charging through a hole in space. We're standing 300 feet below it. We're the Avengers. We can bust arms dealers all the live long day, but that, up there, that... That's the endgame."
Cassie: Are you a monster?
Yellowjacket: Do I look like a monster?
Cassie: I want my daddy!
Yellowjacket: I want your daddy, too.
— Yellowjacket taking Cassie Lang hostage, Ant-Man.
Advertisement:

The Marvel Cinematic Universe is a magical place... and a damn terrifying one at that. With criminals, mystical threats... and a Titan that snapped away half the universe, the MCU can be horrifying to live at times.