Video Game / I Am an Insane Rogue A.I. 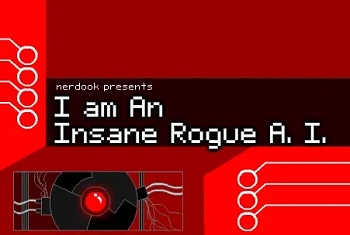 I Am an Insane Rogue A.I. is a browser-based game made by prolific Flash game creator Nerdook and available on gaming site Kongregate.com. You play as an insane rogue AI that has decided to Take Over the World by hacking the mainframes of various facilities all around the globe.
Advertisement:

It plays like a puzzle game: Each facility has a mainframe, some computer terminals, and several researchers and engineers. To hack the mainframe you must take control of all the terminals in the facility, but the researchers can fix them. You can at first only lock the doors and turn on and off the lights to scare them or ring phones to distract them from the computers. The engineers can repair the lights and unlock doors, but not fix the computers. Then robots are added and later turrets, which you can turn to your murderous purpose. Security agents can fix the computers and fight the robots, then there are the elites, a group of people with various extra abilities. Every action (locking doors, hacking drones and computers...) costs a number of "processing cycles": if the AI reaches zero a countdown will start, and if you can't gain any more by the end of it the level will end. Cycles can be gained by successfully hacking a computer and by murdering people.

Released in January 2011, the game had already been played over a million times within a few weeks. Try it here

. It is going to get a sequel more than a decade later, Rogue AI Simulator

, where the titular AI has to manage the human test subjects in a facility somewhere, still trying to take over the world.

I Am an Insane Rogue A.I. provides examples of: