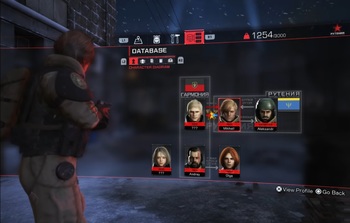 Jim: [drawing two family trees on a whiteboard] Jan is about to have a baby with a sperm donor. And Michael is preparing for the birth of a watermelon with Dwight. Now, this baby will be related to Michael through [draws a question mark] delusion.
— The Office (US)
Advertisement:

Any time a work has many characters involved, there would be some difficulty in keeping track on a character's relationship with the other, whether if they're friends, enemies, family or even just acquaintances from work, school or in that local hobby/sports club. Or how he/she is linked with a place or an item.

The Relationship Chart keeps track on how the person is related to another person, a place, event, organization or object by using arrows/lines (can also be done by String Theory) or arranging them in a chart, diagram or taped to some kind of wall or board closely together to clarify their connections, regardless if they have an important link or if they know each other as a coincidence. Sometimes, the mere connection between two or more persons already carries the risk of revealing information via First-Episode Spoiler.

They can be used by anyone who needs to have an organized line of thought when he/she needs to explain something with the use of visuals. This method is usually used by a Conspiracy Theorist, someone in law enforcement, military, intelligence or a journalist, although an Amateur Sleuth or a Private Detective are known to use a chart too. Someone who spends a lot of time studying materials and compiling them can also do this.

Expect this to be of All There in the Manual, which is usually used in a show/franchise's guidebook/website/etc, which is more prevalent in Asian-made/filmed TV shows, movies, anime/manga and video games. Sometimes, the chart will just be shown in the background of a scene or two as a plot or narrative device.

In video games, it can be used as a mechanism to either tell the story, explain a relationship between certain characters or to give buffs and item/stat bonuses.

See Love Chart and Love Dodecahedron as subtropes for any relationship between two or more characters if they're lovers or are part of a huge family that usually is very confusing to follow. Such a chart may form part of The Big Board.

Tech Tree is a similar trope, although this involves items and technology.

Also see One Degree of Separation, which would lead to a particularly complex chart as every character is tangentially related to every other character. Some groups of characters may be grouped together according to Cast Herd.

For use of this trope in-universe, it must be used when a character or characters actively use a relationship chart as part of the property's All There in the Manual, such as explaining a character/s relationship with a group, etc.

Please do not list every example of the trope being used in anime or Asian-made media if they're based on a property's All There in the Manual only.