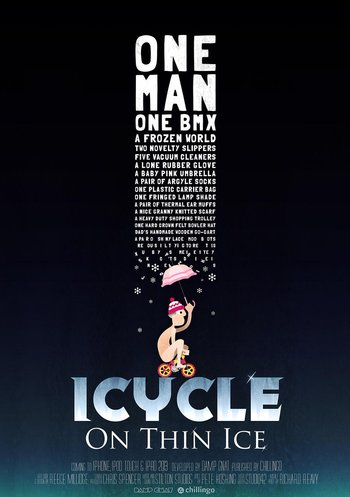 In a post-apocalyptic, frozen Earth, the last Human Popsicle wakes up from his cryogenic sleep to discover that he is Last of His Kind. But he soon discovers that There Is Another, and he sets off in pursuit of them across the frozen wasteland, looking for the last remnants of humanity. Fairly typical of the genre, then.

"Typical," that is, until you realize that he's completely naked, he's riding across the tundra on a comically small, squeaky blue bicycle, and he's chasing a trail of frozen soap bubbles.

As a game, Icycle is a Platformer wherein you control the unnamed man and his tiny bicycle as he Follows The Bubbles across several icy landscapes. The man can't get off his bike—he's naked, after all, and he'd freeze quickly—and he can't backpedal. He's got momentum issues, too. You've got to figure out the layout of the levels and the types of obstacles contained therein, and figure out the best path around them. Due to the way the bike moves, precision is extremely difficult—but you're going to need it anyway, as the platforms are small, the Spikes of Doom are plentiful, and the ice is both slippy and slidey. Being a free Flash game, it's only 8 levels long, but it's 8 levels of precarious cliffs, steep slopes, Bottomless Pits, and spikes. Lots and lots of spikes.

An iOS-exclusive sequel, Icycle: On Thin Ice, was released in 2014. Increasing the number of levels from 8 to 20, and adding a vacuum for collecting ice blocks, a Parasol Parachute, and the ability to cycle backwards, it follows the same unnamed man (now known as Dennis) as an attempt to kiss a snow woman goes horribly wrong.

Both games provides examples of: