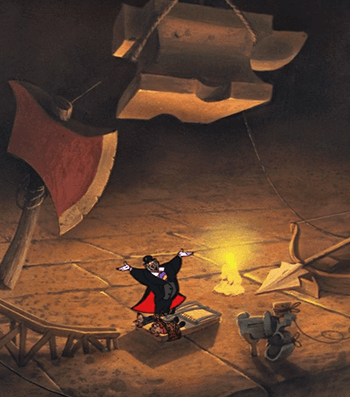 This one will not only kill your nemesis but snap a photograph at the moment of his demise. Sadly for Ratigan, this one fails miserably!
Advertisement:

What happens when you mix a Death Trap with a Rube Goldberg Device?

Every once in a while there's a serial killer, villain, or Big Bad who decides that it's not enough to just kill somebody off. They insist on going the extra mile, to make the manner of their victim's death so complicated and elaborate that it's almost an art form in and of itself — so that anyone who gazes upon the scene will stand in awe of their mental superiority in devising cruel and unusual ways to kill people. Needless to say, this can be the result of a peculiar type of Complexity Addiction.

Delayed deathtraps also have the advantage of giving the culprit an alibi, allowing them to slip away after activating it, and provide verifiable proof that they were somewhere else at the "time of death". However, this is only if the trap works. If it fails, then the culprit has no one to blame but themselves for not ensuring the deaths of their adversary.

This is a Death Trope so expect spoilers. If it fails, you can expect someone to ask, "Why Don't You Just Shoot Him?" (and they often do).

Often attempted by any variety of Evil Genius but it can vary whether or not they are successful. After all, if it's The Hero who is the victim, they'll no doubt find some way to escape the trap...

See also Disaster Dominoes (the accidental version of this trope), There Is No Kill Like Overkill, Rasputinian Death, and Necro Non Sequitur.

The trap almost kills the guy who activated it, but a Creeper ends up being what does him in.

The trap almost kills the guy who activated it, but a Creeper ends up being what does him in.