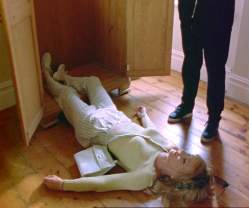 No one is going to believe this was an accident
Advertisement:

A body is found that shows all the hallmarks of having been murdered. The detectives investigate and find the usual array of suspects. However, as the investigation goes, the case makes less and less sense. All of the suspects have alibis; evidence that first pointed one direction actually points somewhere else on closer examination; some evidence makes no sense at all; etc. Eventually the truth is revealed: the victim was not murdered at all, but died in a freak accident (sometimes of their own making) that caused their death to look like a homicide.

Can be a Karmic Death.

Sister Trope to Suicide, Not Murder. An inversion of Make It Look Like an Accident. Compare Accidental Murder, where it was an accident, but it was still a person who did it. Also compare Accidental Suicide, in which a character unintentionally kills themself. Contrast also "Strangers on a Train"-Plot Murder, which is a premeditated murder that deliberately looks like accidental manslaughter. Related to Necro Non Sequitur.