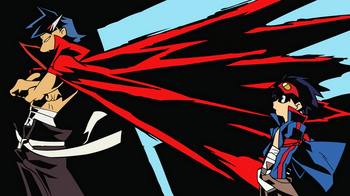 Guess which one is the main character.note It's the dorky kid on the right.
"Long ago on a planet long forgotten by time, a young hero was born, a righteous Saiyan warrior who would bring peace to the galaxy. This... is not his story."
— Narrator, Bardock: The Father of Goku Abridged
Advertisement:

So you're reading a story featuring Alice, the obvious main character. Oh, she doesn't exactly have a flashing neon sign over her head that reads "HERO," but you've read a lot of this kind of story and you know what to expect. It's clear to you that Alice is predestined to save the day, get the guy (or girl!), and live happily ever a—

Did she just get bitten in half by a mutant T. Rex?!

Some creators like to surprise their audience, and one reliable way to subvert expectations is to offer a Standardized Leader and then dispatch them just when everyone is convinced they're The Hero. This can be Played for Drama: there are few more effective ways to showcase Anyone Can Die than by taking out the apparent protagonist. (Plot Armor? What Plot Armor?) But it can also be Played for Laughs, revealing that the person who thinks they're the protagonist is just a glorified bit player. Sometimes the Decoy Protagonist will even turn out to be the antagonist.

Intro-Only Point of View frequently is used to emphasize their importance before The Reveal.

What happens next is the person we perceive as The Lancer, Side Kick or even a fringe loner takes center stage as the real protagonist (maybe even Hero). Usually they reveal a much greater level of personal integrity and strength of will than previously thought.

Note that this does not necessarily involve the death of the initial protagonist, although that is often how this trope expresses itself. If the target dies, they're often a Sacrificial Lion. If the character truly was The Hero (but not the protagonist, maybe), see Take Up My Sword. Also see Dead Star Walking. Compare Quickly-Demoted Leader, when the secondary character does the heavy lifting only for the hero to take control.

In video games, this can overlap with And Now for Someone Completely Different; compare First-Person Peripheral Narrator, where the narrator is obviously not the protagonist. For the villainous version of this trope, see Disc-One Final Boss.

Not to be confused with Supporting Protagonist, which is simply that the focus is on another character than the hero, or Fake Ultimate Hero, who doesn't appear to be the protagonist.

As this is frequently a Death Trope, beware spoilers:

Don't be a menace Intro Scene

An unfortunate reality for some in the hood, but damn if it isn't funny to watch

Don't be a menace Intro Scene

An unfortunate reality for some in the hood, but damn if it isn't funny to watch