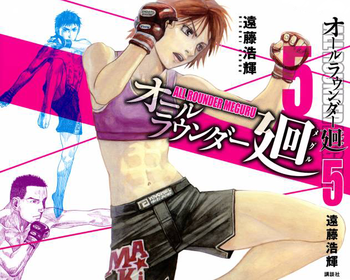 All Rounder Meguru is a sports manga by Endo Hiroki (author of Eden: It's an Endless World!), which ran in the seinen magazine Evening from 2008 to 2016. It is the story of a young Shooto fighter in the amateur circuit, his relationships with his gym and school friends, and his ambitions to reach pro level.

It's also the story of a young man trying to avenge the death of his father and keep himself out of the family business while trying to make a place for himself in the world of professional martial arts.

Much lighter than the author's previous work, the story is highly realistic, both with regards to the mixed martial arts and the character relationships.