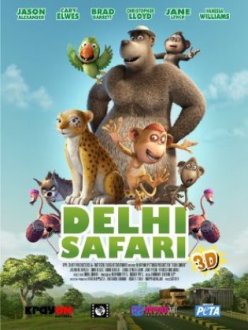 Delhi Safari is a 2012 computer animated film directed by Nikhil Advani and produced by Krayon Pictures. Although the film's origin is India, the film was dubbed in English shortly after its release date and appeared in American theaters in early December of the same year.

Somewhere in the jungles of India, a leopard cub named Yuvi is busy bonding with his father when construction vehicles and workers roam into the area for deforestation. Although Yuvi manages to get away, the cub's father is killed, and he (as well as the other animals) come to the conclusion that they need to relocate before the humans kill anyone else. After much arguing, and realizing that the humans can easily kill them all if they go to war, the animals decide to talk to the humans in order to make them change their minds about destroying their home. With the help of an English-speaking parrot named Alex, Yuvi, his mother, and a ragtag group of other animals venture across India towards Delhi, in hopes that they can convince the humans to reconsider the deforestation.

While the film isn't very popular in America, Delhi Safari has much critical acclaim in India. The film won the National Film Award for Best Animated Film in 2012, as well as the award for Best Feature Film at FICCI FRAMES 2012.