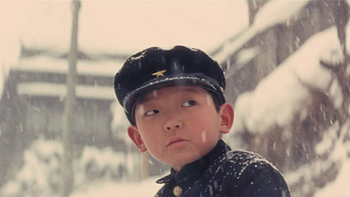 Boy is a 1969 film from Japan, directed by Nagisa Oshima.

Set in Japan in 1966, the protagonist is Toshio, a 10-year-old boy who is deeply unfortunate in his parents. His father Takeo and his stepmother Takeko are con artists. They run a scam in which Takeko steps out in front of moving cars and pretends to get hit, whereupon Takeo extorts money out of the unfortunate motorists. (Takeo, being extraordinarily lazy and selfish, never takes the fall himself.) Things get even worse for Toshio when Takeko discovers she is pregnant; now he has to dive in front of the cars himself. The family, which also includes Toshio's little toddler brother "Peewee", lives a nomadic existence, wandering around Japan jumping in front of cars, while Toshio dreams of a better life.

Not to be confused with Boy, a 2010 New Zealand film by Taika Waititi.