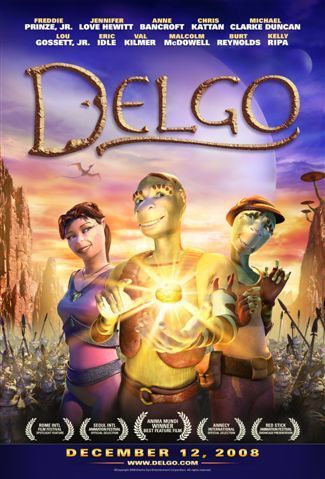 "In the land of Jhamora, the humble Lockni lived in peace. Far away, lost in the clouds, the land of the winged Nohrin grew barren, depleted of essential resources. Concerned for his people, the Nohrin king sent scouts to find a new home. The Nohrin king vowed not to leave until the last of his people had safely resettled. He sent Sedessa, his ambitious younger sister to govern the Nohrin in the new land. Time passed and tensions rose as the Nohrin sought more land. Finally, the Lockni would give no more. Hatred, once stirred, took on a life of its own."
—Narrator of Delgo
Advertisement:

A 2008 animated fantasy film, Delgo is the brainchild of Marc Adler, a technology wunderkind who managed to build his own Atlanta studio and scrape together a $40 million budget from well outside the Hollywood system. Until The Oogieloves came along, this film held the dubious honor of the worst wide-release opening in movie history

: it was released in more than 2000 theaters and earned less than a million dollars in its first and only week.

The story is set in the land of Jhamora, where a group of lizard-people called the Lockni allow a group of displaced dragonfly-people called the Nohrin to settle on their lands. The Lockni immediately regret this decision when a power-hungry Nohrin named Sedessa (Anne Bancroft in her last performance) tries to enslave them. Sedessa is exiled but returns fifteen years later, bent on conquest and with an army of ogre-like monsters called Ando backing her up. It's up to Delgo, the telekinetic son of one of Sedessa's victims, and a cast of colorful side characters to stop her.

As an epic love-in-a-time-of-war story set on another world and driven by an auteur's singular, risky vision, it's sort of like a Bizarro-world Avatar. The filmmakers certainly thought so, and considered suing Fox and Cameron

after seeing Avatar's first trailer. Not much seems to have come from that.