No Flow in CGI 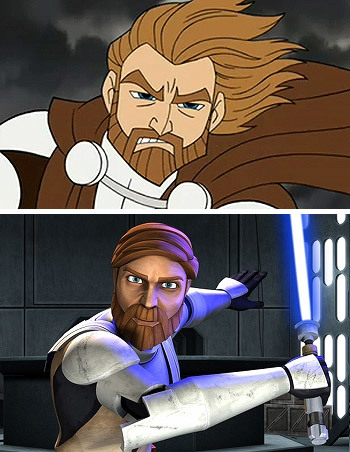 The Force, or extra strength hair spray? You decide.
Advertisement:

In old or low-end CGI, the characters will never wear loose garments, have long hair or include anything that might flow or rustle in wind or when moving.

This is because accurately simulating flowing hair and fabric requires two extremely computationally expensive things: a very high polygon count that can translate into smoothly curved surfaces and individual strands of hair, and computational fluid dynamics

to accurately simulate the material's motion as well as the air itself. As a result, early CGI software and hardware limitations made anything other than clunky, Uncanny Valley inspiring graphics impossible. Even when technical limits and costs are slowly being pushed back, it's still hard and costly to simulate nowadays, especially in video games, where maintaining 60 FPS means there's only 16 milliseconds to calculate all that.

To circumvent these limitations, authors and graphic artists had to make a few concessions and stylistic choices. Such as:

Averting this trope has long been a Holy Grail for CGI animators, which can lead to trouble. A lot of instances of flowing hair or gowns end up flowing too much, taking attention from anything else in the scene, like Dr. Ross' hair in Final Fantasy: The Spirits Within, or Nariko's in Heavenly Sword. When flowing is done right, it either is unambiguously the centerpiece of the scene, or doesn't call attention to itself but rather reinforces a viewer's immersion. This trope is why A Space Marine Is You is still so extremely prevalent: It's easier to model and animate a bald guy (or better yet, always helmeted) wearing an armored spacesuit than it is trying to create an Elegant Gothic Lolita from Harajuku. Just imagine the processing power required to handle the delicate and intricate clothes that flow in a Dramatic Wind... or when running and fighting.

In the modern day, however, aversions of this trope have become increasingly common to the point of ubiquity — film animators have spent decades perfecting the ability to render hair and cloth physics, and even low budget animation has improved in this aspect, with many off-the-shelf programs including physics engines in their toolkits. The place you're most likely to see straight examples in the present day is in video games. While video game graphics rapidly improve with each generation, hair and cloth are still aspects that are difficult to realistically render in real time. Most game engines have rudimentary solutions in place, and some come closer than others, but on the whole, they still can't quite reach the level of detail seen in pre-rendered animation.

To be fair, in real life a lot of people's hair doesn't move much, unless they're in strong wind or fully submerged. But Reality Is Unrealistic and less cool, and besides, how else would the CGI animators show off their skills and technology (and their budget; flowing in CGI can get expensive)?

For another approach to averting this trope, see Jiggle Physics.