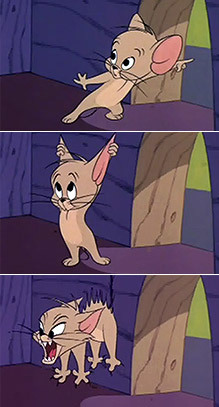 An Intellectual Animal in a cartoon just saw something strange land in the cornfields. It is something beyond description. The animal wants to tell his owners about the dangerous thing he just saw. Unfortunately, he can't talk. So how does he convey what he saw? He alters his physical appearance to resemble the strange thing he just saw.

It's a form of Voluntary Shapeshifting in which one character changes his appearance to tell a story or warn of a danger, especially if that character cannot speak or has trouble speaking. It could be especially jarring if the character shows no signs of being able to shapeshift in any other time.

The character does not have to be The Speechless in order to invoke this trope, and may indeed combine shapeshifting with spoken dialogue to get the idea of the story he is telling across.

A minor variation is when a speechless character attempts to warn the others of the impending danger by playing a nice game of charades.

Compare Metaphoric Metamorphosis, which is when a character morphs into a Visual Pun or other imagery to convey a particular emotion or trait.

When Gumball's family disappears in "The Downer," he imitates their appearance and voices and responds in-character to the terrible meal Gumball made.

When Gumball's family disappears in "The Downer," he imitates their appearance and voices and responds in-character to the terrible meal Gumball made.