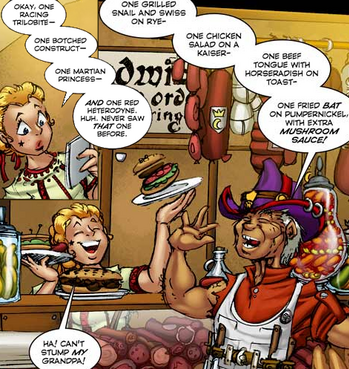 "And I'll have a Prince of Stumvoraus' Big Bet!"note The sandwich maker's hat
Server: Three pork combos, extra bacon on the side, two chili cheese samplers, a basket of liver and onion rings, a catch of the day, and a steak cut in the shape of a trout. You got all that, honey?
Kronk: Three oinkers wearing pants, plate of hot air, basket of Grandma's breakfast, and change the bull to a gill, got it.
— The Emperor's New Groove
Advertisement:

A Rule of Funny trope. A scene takes place in a restaurant, the waitress takes the diners' orders, and after taking their menus, she calls toward the kitchen something that sounds like utter gibberish. Brooklyn accents are typical of these scenes, as is some misfortune happening to Adam and Eve, which is near-universal as code for describing the endless ways to cook two eggs.

There is some Truth in Television to this. Waiters can and will use wacky names as mnemonic devices, and customers use slang for the convenience (like in many other transactions).

There is a reason this is associated with roadside diners: unlike places in towns or cities where the staff turnover would be relatively high, diners located on long interstates would tend to keep the same staff for many years. After a decade of operating a place, every possible order can be an in-joke that the entire staff would be privy to.

Common in, but not exclusive to, the Greasy Spoon. May contain Lampshade Hanging as to the nature of the food. Not to be confused with Hash(ish) House Lingo, though it might be. Very rarely, may be Played for Drama by combining it with Trouble Entendre. Compare with Sommelier Speak, a type of jargon used to describe the flavor of wines.

In one cutaway scene, Peter fills in at the local diner.

In one cutaway scene, Peter fills in at the local diner.