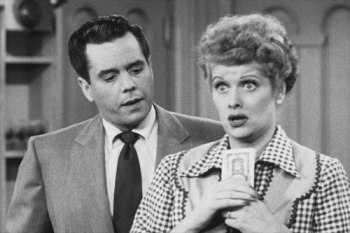 Lucy, you got some splainin' to do!
"I love Lucy and she loves me.
We're as happy as two can be.
Sometimes we quarrel but then, ha-ha!
How we love making up again.
Lucy kisses like no one can.
She's my missus and I'm her man,
And life is heaven you see,
'Cause I love Lucy, yes, I love Lucy
And Lucy (beat) loves me!"
— Ricky Ricardo, serenading Lucy in "Lucy's Last Birthday"
Advertisement:

I Love Lucy was a groundbreaking sitcom from the husband-and-wife creative team of Lucille Ball and Desi Arnaz, under the auspices of their studio, Desilu Productions, running from 1951-1957. The show followed a young married couple, played by and loosely based on Ball and Arnaz themselves, through a series of wacky misadventures.

The show's plot often hinged on Lucy trying to convince her bandleader husband Ricky Ricardo (played by Arnaz) to let her appear in his mambo-centric variety show. Ricky insisted on his wife remaining home to do wife things… because he didn't have the heart to tell her she had no talent. Lucy would come up with a Zany Scheme to subvert his authority, by either making her own money or sneaking into the show. Hilarity Ensues (and this time, it really means it), and a lot of the humor in the episodes' last acts were built around Lucille Ball, in real life, being a very gifted physical comedian.

Ethel Mertz and her husband Fred, Lucy's neighbors and landlords (and in Fred's case, Ricky's sometimes business manager), rounded out the central cast. An old married couple who couldn't stand one another, Fred and Ethel were former vaudevillians that Ricky would occasionally bring into his show, super-charging Lucy's insecurities by leaving her the only member of the gang not in show biz. Ethel would often be the unwilling sidekick to Lucy's harebrained schemes, and Fred would often be the muscle for Ricky's.

The show is popularly credited with featuring the first "inter-racial" or "inter-ethnic" couple on American television. Mind you, it wasn't viewed that way at the time. Until the late '60s, Hispanics were not considered a separate racial group; they were just "foreigners", and a lot of humor between Lucy and Ricky was in their cultural dissonance or in Ricky's funny accent. By today's standards, however, Lucy and Ricky were the first inter-ethnic married couple on TV. note Hispanics were generally counted as part of the white population census, and unlike African- or Asian-Americans did not serve in segregated units in the armed forces. This is not to say Hispanics did not face discrimination; they did. But even Euro-Americans such as the Irish, Poles, and Jews also faced discrimination.

The show was filmed, which was a big deal in 1951. At the time, most TV shows were "archived", mainly as a receipt to show sponsors their ads had run, via kinescope

which is simply a movie camera taking footage of a TV displaying the show's live broadcast. Obviously, this produces really crummy-looking video; that's why most shows from the early '50s have either been lost or are of very little interest for reuse (videotape didn't become available until 1956). I Love Lucy, by contrast, was able to use not being broadcast live to its full advantage. Desi Arnaz invented the live studio Three Cameras technique, which is still standard in sitcoms to this day. This show also invented the Rerun: when Lucille Ball became pregnant and needed a reduction in her workload, Desi came up with the idea of showing a previously-aired-but-much-loved episode instead of something new, which was only possible because Desilu had taken the trouble to film the original broadcast in the first place. "Reruns?" CBS scoffed, "It Will Never Catch On." Well, the laugh's on them; I Love Lucy has been on the air literally non-stop since it was first produced. Television historians have noted that since its original airing, the show has continuously been in syndication somewhere in the world. And because CBS in their shortsightedness signed all rebroadcast rights over to Desi, this has made Ball's and Arnaz's estates filthy stinking rich.

It has erroneously been called the first television sitcom to deal with the subject of pregnancy and delivery. This is incorrect, as Mary Kay and Johnny, the first television sitcom in the United States, had tackled the subject four years earlier. Nonetheless, it was still a very sensitive topic at the time, and the Moral Guardians were horrified. Viewer reaction was actually quite positive, and the episode where Lucy gives birth broke the all-time viewer record up to that point. Because they couldn't actually say "pregnant" on air, they instead popularized the euphemism "expecting", while the episode title was a Bilingual Bonus ("Lucy Is Enceinte"). And now you know.

After the regular series ended in 1957, the cast carried on with The Lucy Desi Comedy Hour specials — essentially double-length "I Love Lucy" episodes with greater emphasis on famous guest stars and exotic locations. These are often considered to be inferior to the original series, and the later episodes particularly suffered from the rapid deterioration of Lucy and Desi's marriage – they divorced shortly after the final Comedy Hour episode wrapped. Over the following decades, Lucy was able to carry on the premise (if not the exact same character) on her own with The Lucy Show, Here's Lucy, and Life with Lucy.

In short, this show was responsible for more tropes than anything on television before or since (excepting perhaps Star Trek, which by the way was also originally produced by Desilu Studios). As noted above, it has not stopped airing since October 15, 1951. The entire reason that The Oldest Ones in the Book super-index has a cutoff date of November 8, 1960, is to include the complete first run of this pioneering series (which, including the Comedy Hour retool, lasted until April 1 of that year).

Since 2013, CBS has begun to air some of the most iconic episodes in color, usually around the holidays. However, the black and white versions remain widely available on home video, and in other channels' reruns.

The 2021 biopic Being the Ricardos is about the relationship between Lucille Ball and Desi Arnaz at the time of the show.

This show provides examples (often the very first examples) of:

Example of:
Locked in a Freezer