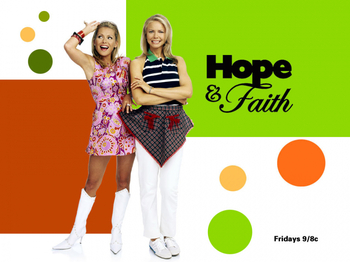 Hope & Faith was an American sitcom that ran for three seasons (2003–06) on ABC, starring Faith Ford, Kelly Ripa, and Ted McGinley as well as a very young Megan Fox.

The show revolved around the two Fairfield sisters, Hope (Ford) and Faith (Ripa). Hope is a sensible married mother of three who has a nice calm life until Faith arrives on the scene. Faith is the complete opposite of her sister, an actress whose character on a soap opera has just been killed off and left her unemployed. She moves in with Hope and causes all kinds of disruptions in the family's life.

This sitcom provides examples of: