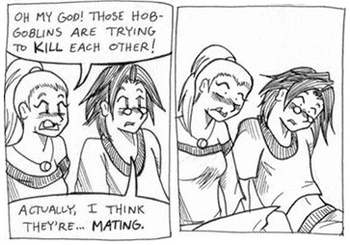 Sex sells, but censors censor. Getting the goods to penetrate that blockade is hard. Then there's times that characters do really twisty-turny stuff, in front of a crowd! Stuff so steamy, just telling it can get people flustered, and as for showing it, well, the Moral Guardians that don't faint will break out the Torches and Pitchforks.

The solution? Let the audience Take Our Word for It. Keep the limber lambada dancers off-screen and have witnesses tilt their heads or turn the magazine sideways, preferably with their mouths agape. Their conversation may be vague about what is happening, yet still implying something kinky is happening, possibly at an oblique angle, and they can't take their eyes off it.

This avoids the problems of showing it on-screen and also gives the viewer's imagination (perverse) grounds for speculation.

Occasionally happens with other weird events, as people tend to imitate others' actions subconsciously.

Often resembles the head-tilt that dogs frequently do when confused.

Makes for a great diversion to get the guards distracted... and everyone else involved!

Compare Comic Sutra, which creates similar kinky fun by suggesting something unspeakably obscene and letting the audience's imaginations fill in the details.

See Noodle Incident for the non-sexual version of this trope. See also Strangely Arousing, when characters get this reaction to things that would normally be considered non-sexual.