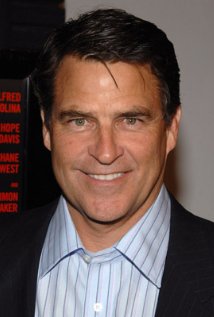 The Grim Reaper of Television.
TVTropes has officially jumped the shark, now that McGinley has his own article...
Advertisement:

Theodore Martin "Ted" McGinley (born May 30, 1958 in Newport Beach, California) is an American actor. His famous roles include Stan Gable in Revenge of the Nerds and Jefferson D'Arcy in Married... with Children.

In television circles, McGinley is known as the "patron saint of shark-jumping" by Jump The Shark founder Jon Hein, due to his historical tendency to join shows after their first and strongest period of production was past (most notably, he appeared in the later phases of The Love Boat, Happy Days, Dynasty (1981), Married... with Children, and The John Larroquette Show). Bat-Mite even pointed that out when he used his powers to make McGinley replace Aquaman's voice actor in the Series Finale of Batman: The Brave and the Bold.

McGinley's stint on Married... with Children subverted the idea that he joined shows near the end of their runs, as he became a regular in season 5 when he was cast on the show as Jefferson D'Arcy, a con man fresh from his stint in prison for selling radioactive land as retirement property who ends up sleeping with Marcy Rhoades, who is single after Steve abandoned her to become a park ranger,note He had previously guest starred on the season four Christmas episode where Al's failed attempt at getting money for his family for Christmas leads him to have a near-death experience where Sam Kinison shows Al what life would be like if he was never born. McGinley played Peg's alternate reality husband, Norman Jablonski. and it didn't end until season 11; nonetheless he did join the cast late and represented a later phase, and so MWC conforms to his overall motif (though most fans don't consider McGinley to be the reason why MWC went downhill.note Some blame it on the addition of Shane Sweet as Peg's nephew, Seven, which was seen as a blatant case of Cousin Oliver, to the point Seven was eventually Chuck Cunningham'd, while others feel that the show just ran its course and other sitcoms like The Simpsons were becoming more popular than it.