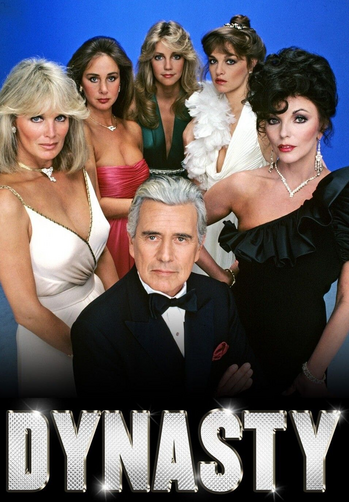 "They don't write female characters like they used to."
— Roger (while watching one of Dynasty's many Cat Fights), American Dad!
Advertisement:

Imagine Dallas, but in Denver, replace Larry Hagman with Joan Collins, and throw in a few catfights and lots and lots of shoulder pads.

Once Dallas took off, Richard and Esther Shapiro created this series about oil families living in Colorado. which Aaron Spelling produced. It initially focused on Krystle Grant Jennings being just married to oil magnate Blake Carrington, and her tempestuous relationship with the children from Blake's last marriage. The next season, Alexis, the wife from the first marriage, shows up and the fun really started.

Just as Charmed would later top Buffy in terms of Fantasy Kitchen Sink, this show topped Dallas in terms of every Soap Opera trope the writers could think of (with one extremely notable exception).

The show had a spinoff, The Colbys, but it only lasted a couple of seasons. Dynasty unfortunately didn't last much longer either.

The entire series has been released on DVD.

A reboot series with a new cast premiered on October 2017.

No relation to the KISS album of the same name.

Tropes shown on Dynasty and The Colbys: