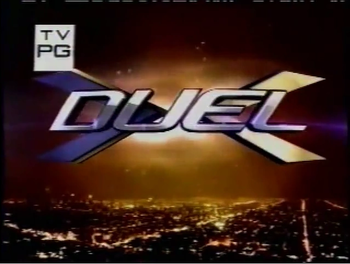 The logo of the show's American version.
Let's Duel!
Advertisement:

Duel is a Game Show created in France, originally running on ABC in the United States (from December 2007 to July 2008) and ITV in the United Kingdom (from February to April 2008). The French version premiered on France 2 several months later, and aired in that country until 2013. It has spun off versions in several other countries as well, usually most closely resembling the UK and French versions. In particular, Spain had its own version which was able to be viewed internationally via here

The show pits two contestants against each other in a head-to-head quiz. Both players are given 10 chips at the start of the duel, which they use to select answers. Each question is multiple-choice with four answers, A through D, and is asked to both players simultaneously (a rule change for the French version in 2013 reduced the number of answer choices per question to three). Contestants stand on opposite ends of a podium with a screen in the middle, which displays the question and also blocks their view of their opponent. Each side of the podium has four indentations marked A through D, and each contestant may cover any answers they think might be correct (though every question only has one correct answer).

The first contestant to lock in has the option of putting time pressure on their opponent, known as a Press in the U.S. version and an Accelerator in the British version. When used, a Press or Accelerator puts a seven-second time limit on the opponent, who is automatically locked if they haven't already when time runs out. Each contestant could use this twice per duel (once in the U.S. version's second season).

Chips lost to incorrect answers were initially added to a progressive jackpot; beginning in the U.S. version's second season, the value of a Duel was determined based on how many questions were played and could be doubled in a bonus round. In the UK version and the French version, players who won four Duels in a row won the jackpot (which was worth €100,000 in the French version and later reduced to €50,000) and retired undefeated, while the U.S. version's second season required five wins (this convention was also used in the Hungarian version); accomplishing this feat increased the champion's winnings to $500,000. In the first season of the U.S. version, the four players with the longest consecutive win streaks (with ties broken by the amounts of money they won) returned on the season finale to play a single-elimination tournament for the jackpot.

Not to be confused with the South Korean drama series of the same name.