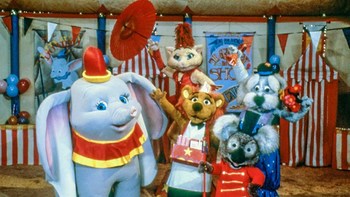 The cast of the show.
Advertisement:

Dumbo's Circus was a live-action/puppet show that aired on the Disney Channel. It premiered in 1985 and ran for 114 episodes, with reruns continuing until 1997. The main characters were portrayed by animatronic puppets created by Ken Forsse who also remembered for his work on Disney's Haunted Mansion and The Adventures of Teddy Ruxpin. It was a companion show to Welcome to Pooh Corner, which had similar characters and production techniques.

In the show Dumbo, the titular elephant from Disney's 1941 classic is now grown and runs his own circus. No other characters from the film appeared, in their place was a cast of original anthropomorphic animal characters, who perform in the circus and help Dumbo run it: Lionel the lion; Lilli, a cat; Sebastian, also a cat; Fair Dinkum, a koala; Q.T., an orangutan, and Barnaby, a dog.

Notable for being Jim Cummings' first professional acting job and the first in a long line of projects he'd do for Disney, voicing Lionel.