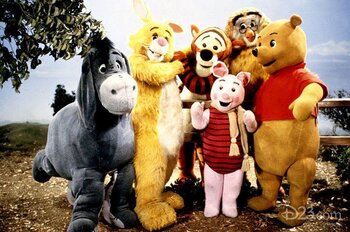 Welcome to Pooh Corner is a show based off of Winnie the Pooh and the first of many TV shows from the franchise.

In contrast to later Pooh shows, which were mostly animated, Welcome to Pooh Corner is a live action show that uses puppets and state of the art (at the time) animatronic costumes portrayed by human actors, filmed to a blue screen background as opposed to a traditional set, as the show centers around the antics of Pooh and friends in the Hundred Acre Woods, with music being written by the The Sherman Brothers.

Outside of normal episodes, several holiday specials and Direct to Video educational specials would be produced based on the show as well.

The show is one of the first programs to be made for the Disney Channel and would air on the network from 1983 to 1986, with reruns of the show airing til 1997. While it has since fallen into obscurity and has never been acknowledged again after it stopped, it continues to have a cult following to this day and is well regarded by those who grew up watching it.

The show contains the following examples: