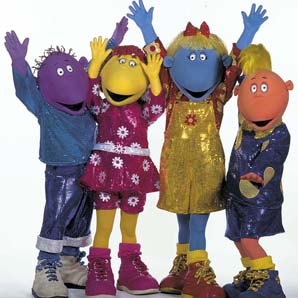 Hey, hey, are you ready to play? (From left to right: Milo, Fizz, Bella, and Jake.)
Advertisement:

Tweenies is a British children's animatronic puppet series which debuted in 1998. Like other children's shows in rotation, it aimed to entertain as well as educate children about various life and social skills using songs, stories and the like. However, unlike some of its contemporaries, the characters spoke in a discernable language and often directly interacted with the "outside world".

The show revolved around the adventures of four young children in a daycare centre, with their two adult guardians and two dogs (who were in care of the centre). It enjoyed phenomenal success both inside and outside the UK, spawning no less than five top-twenty hits from spinoff records and merchandising that sold by the bucketload. In the U.S., it aired for a while on Noggin, before it became Nick Jr.. The series proper ended in 2003, but home video sales, reruns and large-scale live tours helped sustain the series' popularity for the remainder of the Turn of the Millennium. In fact, the show remains popular enough to continue having re-runs, nearly 20 years after its first episode debuted.

The main characters in the series included:

The centre also has a special "Tweenie Clock" that, when pressed by a character, dictates which segment comes next in each episode. The segments include:

Not to be confused with Tweeny Witches.