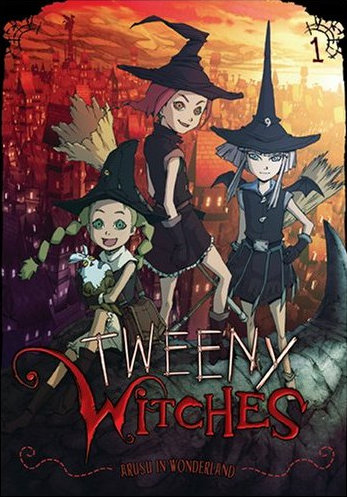 A never-before-seen magical world.characters Left to right: Eva, Arusu and Sheila.
"Anyone can use magic as long as they believe with all their heart!"
— Arusu
Advertisement:

Arusu (Sachiko Kojima) is an 11-year-old girl who has a thing for the occult and is especially obsessed with witches and magic, thanks to a book given to her for her fifth birthday by her Disappeared Dad, Jidan (Atsuki Tani). When some bullies try to steal her book, a mishap sends her falling literally into the Magical Realm. Almost immediately, she meets Sheila (Houko Kuwashima) and Eva (Ryo Hirohashi), two apprentice witches who are close to her age.

Delighted as she is to be in the Magical Realm, she is less than delighted at how their society is run. Everyone is certainly not overjoyed at the reality of magic, while she believes magic should be used to make people happy. More disturbing to her is how the witches capture fairies and keep them behind bars for their use in spells. When she releases all the captive fairies back into the wild, the Grand Master of Witches (Ryoko Kinomiya) punishes Sheila and Eva with the Curse of Eternal Youth, leaving her bound in duty to join them on their quest to recapture the fairies and break her new friends' curse.

As she becomes more familiar with magic and her new friends, she learns more about her new world and its extremely dark underbelly — in particular, the war between the witches and their enemies, Grande (Joji Nakata) and his faction of warlocks, who seem intent on tearing everything apart and are also very interested in that book of hers...

Certainly one of the darker takes on the Magical Girl genre, Tweeny Witches (魔法少女隊アルス, Maho Shôjo Tai Arusu, translated as Magical Girl Squad Arusu) is a 2004 anime created by Keita Amemiya and produced by Studio 4°C. The series aired within Tensai Bit-kun on NHK Educational TV from April 9, 2004, to March 4, 2005, with a 6-episode OVA spin-off titled Tweeny Witches: The Adventures released on November 22, 2007.

A manga adaptation by Mai Jinna, titled Mahō Shōjo Tai Arusu: Minarai Majo Kōza (Lessons For Apprentice Witches), was serialized on two pages in Shogakukan's shoujo magazine Ciao from the May 2004 issue to the March 2005 issue.

For two anime/manga series with similar art-style, premise, and themes, see Soul Eater and Little Witch Academia. Not to be confused with Tweenies.