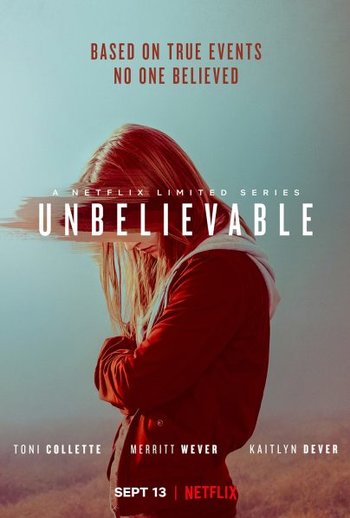 If the truth is inconvenient [...] they don't believe it.
Advertisement:

Unbelievable is an eight-episode mini series released on Netflix on September 13, 2019. It is Based on a True Story, being a dramatization of the 2008–2011 Washington and Colorado serial rape cases

, but is especially inspired by a Pulitzer-winning article

that journalists T. Christian Miller and Ken Armstrong wrote about the case.

The series mostly takes place in two states and two timelines. In 2008, teenager Marie Adler's account of her brutal rape in Lynwood, Washington is met with skepticism by the police, who push her to recant her statement. Three years later, and completely unaware of the existence of Adler, detectives Karen Duvall and Grace Rasmussen pursue a serial rapist across multiple jurisdictions in Colorado. The show bounces back and forth between the two timelines, exploring the devastating effects Marie's experience has had on her while Duvall and Rasmussen chase down leads on a series of rapes whose circumstances are eerily similar to Adler's.