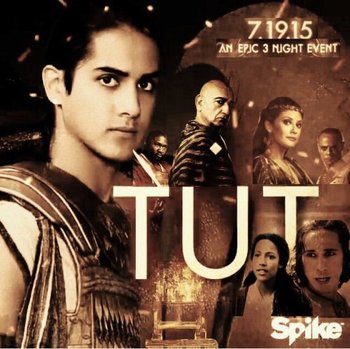 Tut is a Canadian-American miniseries that premiered on U.S. cable network Spike TV on July 19, 2015.

The three-part miniseries is based on the life of Egyptian pharaoh Tutankhamun. Tut was first announced by Spike in May 2014. The miniseries marks a return by the network towards scripted programming, and in particular, "event" series that cater to a "balanced" audience (in contrast to the remainder of Spike's programming at the time, which has typically skewed towards a male audience). Such event series have also been recently popular among other networks, such as History. Tut is produced by Muse Entertainment, best known for its other miniseries The Kennedys and The Pillars of the Earth.

In 1332 B.C.E Pharaoh Akhenaten (Silas Carson) has been poisoned by his most trusted servant. His nine-year-old son, Tutankhamun (played briefly by Kaizer Akhtar) is then thrust into the position of Pharaoh of Egypt and forced to marry his older sister Ankhesenamun (Sibylla Deen). But over the course of the following years, the Vizier Ay (Ben Kingsley) takes control of the important decisions that Tut is expected to make and ten years into his reign, a now teenage Tut (Avan Jogia) finds the country in economic turmoil and crops ruined by drought. Tutankhamun must use his power as Pharaoh to deal with a deadly plague spreading through his kingdom all while his enemies continue their plot to conquer Egypt, even if it means they'll have to eliminate him.