Hair of Gold, Heart of Gold 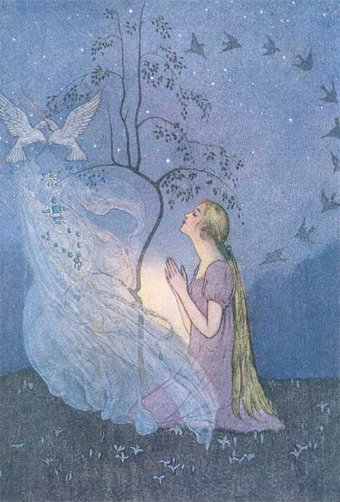 Queen Titania: Astral, the others are a young race, they have so much to learn. They don't remember that we were once their guides.
Princess Astral: Well... this one's different. He has blond hair, and soft blue eyes! And a smile that makes me feel like...
Titania: ... a warm sun?
Astral: Yes!
— Brief conversation referring to Tristan Andersen from The Other Kingdom
Advertisement:

The character is a blonde. Therefore, obviously, she is young, beautiful, pure, kind, and innocent, and the innocence can range up to Virgin Power. If she fights, it's reluctantly and she tends to avoid violence where she can.

Victorian literature would also use it to portray her as delicate and fragile, if not actually the Ill Girl—being, of course, Too Good for This Sinful Earth. This part is largely a Discredited Trope.

Men falling under this trope are rarer, but the blond hero can also have Hair of Gold. Such a hero is more action-oriented than the Hair of Gold heroine, but he is also good, wholesome, kind to those weaker than himself, modest, and prone to be the Chaste Hero or Celibate Hero.

Compare and contrast Mystical White Hair, where a pale hair color denotes arcane traits, with or without Incorruptible Pure Pureness. Also compare the popular and fun-loving Everyone Loves Blondes, and contrast White Hair, Black Heart, for when light hair is paired with an evil character. Dumb Blonde can be related if Dumb Is Good is also in play.

Note: Not all blondes belong in this list. Not even all good blondes. If the character does not match the personality type, then they do not have Hair of Gold, Heart of Gold and should be listed only if they exploit the expectation (such as using their blonde hair to look sweet and innocent).