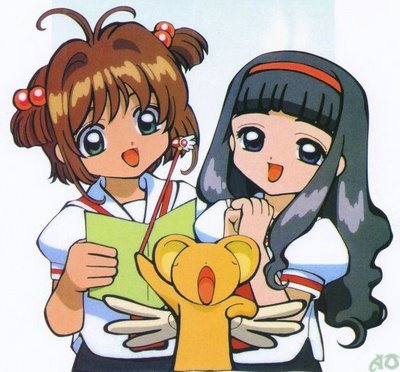 The simplest two examples (and Kero-chan).
"Dreams are like flowers in your hair! Girls wear many of them. Adults look foolish even with one."
— Mameha, Memoirs of a Geisha

Any decoration a character (almost always a young girl) wears in her hair—bands, clips, flowers, ribbons, tiaras, you name it—to make herself look younger and cuter. A grown woman wearing one looks childish, though a character with Rapunzel Hair might be able to get away with cool-looking decorations; a male character (regardless of age) wearing one looks silly (and, of course, his sexuality will be called into question), making this an Always Female Trope. (Except in Yaoi Genre, where cute young guys can wear barrettes or hair clips. Or when Real Men Wear Pink is in play.)

Mostly used in anime, if the author has Only Six Faces, but the relatively mundane setting doesn't call for the more outlandish Anime Hair or even nonstandard Hair Colors; the next best way to distinguish heads is by having the girls wear their hair up with increasingly iconic accessories. Especially prevalent if the main character has brown hair. They're also commonly paired with Girlish Pigtails.

The type of hair decoration also tells you something about her age. Double-orb hair clips and Alice bands are usually worn by preschool girls, while middle- and high-school students prefer ribbons. A particularly common decoration is a ribbon tied into a huge bow. This is more common for elementary or middle school children, and usually signals innocence.

Sometimes this overlaps with Tertiary Sexual Characteristics: you know it's a girl because she has hair decorations. Naturally, she'll be cuter.

Occasionally part of a Nice Hat, Frills of Justice, and/or Pimped-Out Dress.

Supertrope to Flower in Her Hair.