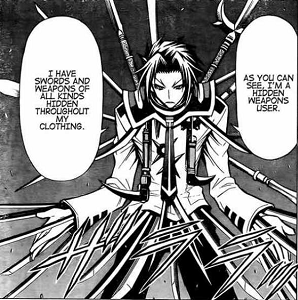 There's a rocket launcher hidden somewhere in there, too.
Zu-Zana: But... that's a Compact Laser Deluxe!
Trin-E: Where were you hiding that?!
Jack: Ladies, you really don't wanna know.
— Doctor Who, "Bad Wolf"
Advertisement:

Any weapon hidden in a creative place on a person's body. Not the same as a Victoria's Secret Compartment or Trouser Space. If the weapon is stored around the belt area, the trope you're looking for is Pants-Positive Safety. Perennial favourites are the Little Useless Gun. If there are lots of them, Extended Disarming may ensue. See also Hyperspace Arsenal.