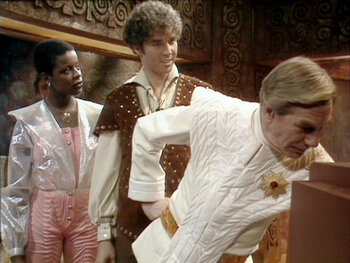 Asking a bunch of Actual Pacifists to become terrorists: Sometimes you really should just stay at home.
Written by Allan Prior.
Directed by Desmond McCarthy.
Airdate: 21 January 1980.
Advertisement:

The Liberator arrives at the planet Obsidian, following a rumor that Blake is there and looking for recruits and a base of operations. Unfortunately Servalan has arrived first, planning to seize both the Liberator and Obsidian. The planet is home to the Pyroans who have adopted a policy of total pacifism, keeping invaders at bay by threatening to destroy the entire planet along with any invasion force. It's a policy that has worked well, until now.