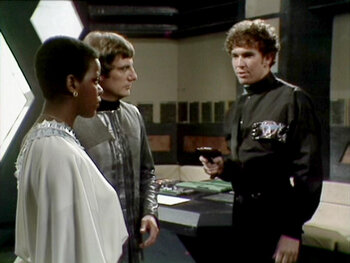 Believe it or not, this is Avon's new crew.
Written by Terry Nation.
Directed by David Maloney.
Airdate: 14 January 1980.
Advertisement:

Carrying on from last week's cliffhanger, Avon has returned to the Liberator to find it under the control of a Federation squad led by Captain Del Tarrant and Section Leader Klegg. Meanwhile Vila and Cally face their own dangers.