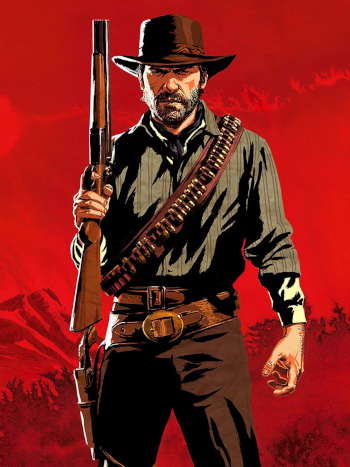 Well, where else am I gonna put my bullets? What, a pouch? Get outta here!
Advertisement:

Bandoliers are belts that hold ammunition for Cool Guns, grenades, or just weapons in general (or even mundane items). They also give off coolness and badassery when worn.

The fundamental concept is that a warrior will want to wear all of his equipment close at hand, so the bandolier sends a message that the wearer expects combat. Various cultures have used bandoliers for different purposes. In the age of muzzle-loading firearms, a wealthy soldier might wear multiple single-shot pistols so he could discharge them rapidly one after the other without reloading. Cavalrymen and banditos of the Old West might also wear multiple pistols, as reloading was still a laborious process through the 1800s. In the latter half of the 1800s, cartridge technology made it feasible to wear individual bullets or shotshells in the bandolier. It was a sort of status symbol to wear a fully-loaded bandolier, as this showed you were not only a warrior but also wealthy enough to maintain a full complement of ammunition.

Modern hunters who use slow-reloading bolt-action rifles or single-shot rifles would usually have a leather or canvas bandolier slung across the chest or around the waist in the time-honored manner, or a smaller 5-10 round bandolier wrapped around the rifle stock.

In Wild West settings, Banditos will stereotypically be wearing them, in emulation of Pancho Villa.

During wartime setting, characters armed with fully automatic weapons may have a string of rounds draped across their chest like a bandolier. The difference here is that there's no leather/cloth belt; the rounds are held together by metal links that are ejected along with the spent cases when the weapon is fired.