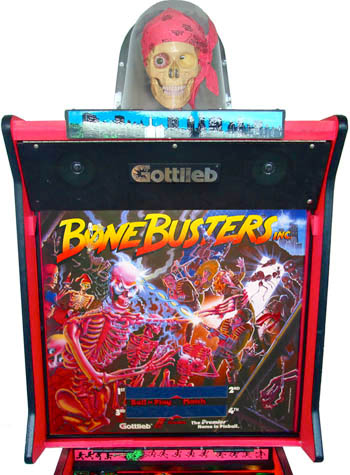 "Who you gonna call? Someone else."
"I've got a bone to pick with you!"
— One-Eye
Advertisement:

Bone Bustersnote Full title: Bone Busters, Inc. is a Physical Pinball Table by Gottlieb, released under the "Premier" label in 1989. It was designed by Ray Tanzer, and illustrated by Constantino and Jeanine Mitchell and Brian Johnson. Only 2,000 tables were made, and the ones still circulating tend to be hoarded by collectors, making it a bit of a rarity today.

For some unspecified reason, Chicago is under siege by an army of undead skeletons, and the only ones who can stop them are the brave men and women of Bone Busters, Inc. While the disembodied head of Ol' One-Eye turns and taunts you from above the backbox, purge skeletons from the Jogging Path, the Fast-Food Restaurant, and the Elevated Subway, then head for Lower Wacker Drive and advance the awards. Shoot the center fountain to collect the Water Tower Bonus, discover the secret of the Opera Bonus, and find Liz's Surprise for more points. Energize those playfield zap rods, lock three balls around town, then make the Long Jump to start multiball and clean up the burg.

A digital version of Bone Busters is available for FarSight Studios' The Pinball Arcade.