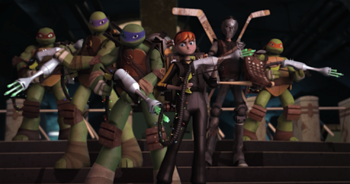 Who you gonna call?
Advertisement:

For the longest time, the study, capture and exorcism of ghosts have often been seen not as a Science Fiction or even Science Fantasy career, so much as a job populated entirely by either consecrated members of The Vatican or freelance warlocks paid for their banishments.

This state of affairs lasted until 1984, when a Horror Comedy film called Ghostbusters showed its heroes using Mad Science to deal with ghosts. Not only was the movie a smash hit, it created a franchise that has endured for decades. And when a franchise is that popular for that long, many other works will reference it with affectionate humor, allowing it to enter the hallowed realm of Stock Parodies.

To qualify as Real Spoofbustersnote not to be confused with the SpoofBusters, Stock Parodies of the MythBusters, the characters should meet two specific criteria.

Note that it's not necessary for ghosts to be the target of a Real Spoofbuster, as this trope is about the "busting" part of the equation. Still, it often crosses over with Demon Slaying, Hunter of Monsters, Occult Detectives and other fields of Paranormal Investigation.