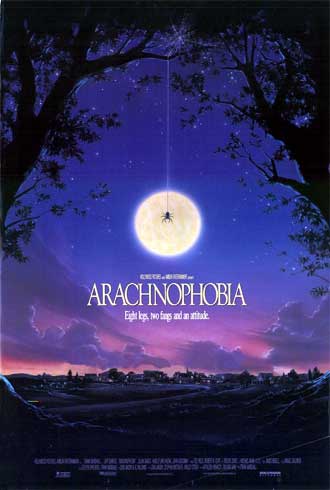 Molly: What is it?
Delbert: It's hard to say... Would anybody object if I tore this floor out?
Molly: I would.
Delbert: False alarm then; lead on.
Advertisement:

A horror/comedy film released in 1990, Arachnophobia starred Jeff Daniels, John Goodman, Julian Sands, and Peter Jason, written by Don Jakoby and Wesley Strick, and produced by Kathleen Kennedy and Richard Vane, with Steven Spielberg as executive producer. This was the first film directed by Frank Marshall. It was also the first film released under Disney's Hollywood Pictures label.

A previously unknown species of spider is discovered living in an isolated sinkhole within the Venezuelan jungle by entomologist James Atherton (Julian Sands). These spiders operate with a hive mentality and carry an extremely potent venom which kills in seconds. When one of the spiders is accidentally transported to a sleepy California town in the coffin of its first victim and later mates with a common house spider, the hybrid descendants terrorize the town for weeks while the newly-arrived city-mouse family physician Ross Jennings (Jeff Daniels) struggles to make sense of the mysterious deaths. Aiding him is the Eccentric Exterminator Delbert McClintock (John Goodman). The film was a financial and critical success thanks to its mix of horror and humor.

There was also a PC game released on several platforms (Amiga, DOS, and Amstrad CPC) that was vaguely related to the movie, in which the player took the role of the exterminator and traveled to different towns to locate and kill off the spiders.